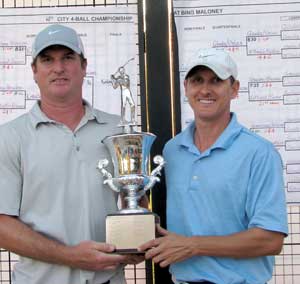 The qualifying score was 70. We needed 3 teams from the 5 teams that shot 71 to make the 32 teams that were needed and Furlong, Atchison,Gandy and Urias were the teams that almost went all the way.

The champions of this years tourney were Mike Williams and Scott Bubany.They won on the 20th hole with a birdie beating Mike Furlong and James Atchison.

Furlong and Atchison,was the 32nd seed who beat the number one seed Russell Humphrey and James Watt 1 up in the first round of match play.They were also one of the 5 teams that shot 71 in a playoff.The 31st team of Craig Gandy and Ben Urias also shot 71 and won 1 up over two time 2nd seed defending champions Gilchrist and Woods.

They then lost their match to Williams and Bubany 5 & 4 after making it to the semi finals.Gandy twisted his back on the 5th hole and Urias made it to the 13th all alone.

Humphrey & Watts and Looper & Peterson and Tom Semereaux & Ryan Wilson all shot 65 in the qualifying round. Ryan Sasser made a double eagle on the 510 yard 6th hole with driver and 6 iron. We had 86 players this year, fourteen more than the 72 we had last year.