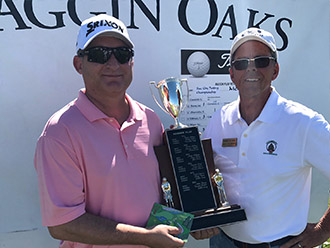 The 59th City Putting Championship was once again filled with good competition. In the Junior division it was an upset of two time defending champ Griffin Long by a very determined Dylan Van Ostrand. Dylan won the match 5 & 4. The match of the day came in the Men’s division finals. One down going to 18, Bob Adams aced 18 and sent the match to sudden death. On the first playoff hole Bob promptly rolled in another ace only to be followed by the same from opponent Michael Angel. Bob aces the second hole and Michael showed no fear and drained an ace once again. Going to the 3rd hole Bob stepped up and to the roar of the crowd aced the third hole of sudden death, not to be outdone, Michael followed once again with an ace. We were all witnessing maybe the best finals in history. On the fourth and final hole , a long one , Bob putted 3-4 feet past and missed coming back, Michael two putted for the victory. The Golf Council members were all very proud to have one of our own in the finals, great job Bob Adams.