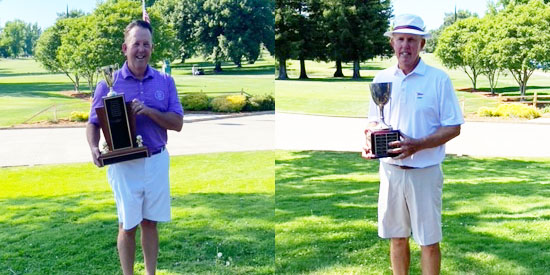 100 of the best Seniors, Super Seniors, and Legends players (75 years and older) in Northern California participated in the 49th Annual Sacramento County Senior & Super Senior Championship held at Ancil Hoffman golf course in Carmichael, CA. Tuesday’s windy conditions made a beautiful but difficult golf course that much tougher. Only 1 player was able to break par.

In the Super Senior division, Jeff Burda from Modesto won for the third straight year with scores of 69-72-144 to win by four shots. Jeff has also won the Senior Division five times dating back to 2008. Matthew Free from Pleasant Hill finished 2nd with 76-69-145.

The shot of the tournament goes to Casey Boyns with an “ace” on 17 using an 8 iron from 153 yards!

Many thanks to Asa Jennings, Kathy Fitzhenry and Golf Superintendent Greg Bliek, along with the entire Ancil Hoffman staff for all your help. I would also like to thank Larry Glasmire, Linda Delong, Mike Fleming, Bob Fleming, Bob Adams, Steve Yates, and Gary Bushman for all your help and support. I would not have been able to run this event without all of you!