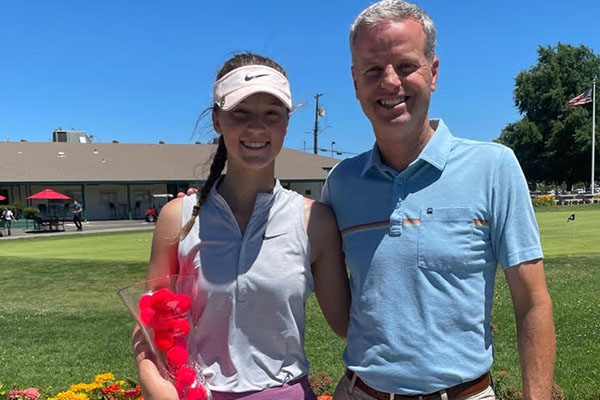 Haggin Oaks came full circle today at the Inaugural Sacramento Valley Women’s Amateur Championship. Designed by world-renowned Alister MacKenzie back in 1932, Haggin Oaks is one of several designs of his in Northern California. MacKenzie was well ahead of his time, collaborating with one Marion Hollins on many of those designs including Pasatiempo, Augusta National and Cypress Point. Hollins was an elite amateur golfer, winning the US Women’s Amateur in 1921 and the Pebble Beach Championship a record seven times. She also captained the inaugural USA Curtis Cup team in 1932. On the basis of a shared strategic golf course architectural philosophy, she forged a fruitful and enduring design collaboration with MacKenzie who extended her full credit for the idea of making Cypress Point’s iconic 16th hole into a dramatic “one-shotter”. As a result of her contribution to the game, she was inducted as part of the 2021 class of the World Golf Hall of Fame.

89 years after Haggin Oaks opened for the first time, an illustration of just how far women’s golf has advanced was showcased across MacKenzie’s fairways. A stunning quantity of elite players from local amateur ranks, collegiate competitors (from around the world) and some of Sacramento’s finest local juniors teed it up to test their mettle against fellow players. The SVWA is designed for the “Top Women Amateur Golfers in the West” and is open to female amateur golfers with handicap indexes not exceeding 9.4. Co-hosted by the Sacramento Golf Council and the team at Haggin Oaks, the inaugural SVWA was held over two days on Saturday & Sunday, June 12th & 13th, 2021.

After the first day of play, Dasa Urbankova was the only player to keep her score in the red numbers as the MacKenzie GC proved tough on that back nine and watched the entire field slide back as the day progressed. Urbankova finished at -2 with an outstanding score of 70 that featured five birdies. The Czech Republic-born Sports Management major birdied two of her first three holes to go -2 early in her first round.

But on day two, the script flipped with a new leaderboard when Urbankova fired a 41 on her front nine and slipped from ahead of the pack. Three red scores were posted among the second day scores, but it was a birdie-birdie finish by Granite Bay’s 16-year-old Ellie Bushnell that brought home the victory with a two-day total of one under par 143.

It is one more amazing title to add to the already long list of amazing golf achievements for the young prep star:

She tied a 38-year-old scoring record, shooting a spectacular 5-under par 67 at El Macero Country Club in Yolo County to win the individual title as a freshman in 2019 at the California Interscholastic Federation Northern California Championships. Bushnell’s super round propelled Granite Bay to a second-place team finish, only one shot behind Dougherty Valley-San Ramon, the team champion.

This past July, she won the girls 15-18 division of the Future Champions Golf Callaway World Golf Championship, played at Temecula Creek Golf Club in Temecula. She had rounds of 67, 74 and 75 for a 3-over-par 216 total.

She finished second, just one shot out of first place, in the Girls College Prep Division of the Future Champions Golf Tour’s National Tour’s Northern California Opener at Silverado in January. Bushnell shot 71 on the South Course and 79 on the North Course.

She was second in the girls 13-14 Division of the IMG Academy Junior World Championships in 2019, shooting rounds of 68 and 73 for a 5-under 211 total at The Country Club of Rancho Bernardo.

Bushnell and Kirstin Angosta of Henderson, Nev., finished first at a 2020 U.S. Women’s Amateur Four-Ball Qualifying at Turlock Golf & Country Club. They shot 68. * In July, she tied for 15th in stroke play qualifying at the 54th California Women’s Amateur Championship, shooting 76-73 – 149 at Pasatiempo Golf Club in Santa Cruz. Bushnell lost in the Round of 32 to Katherine Muzi of Newport Beach, 3 and 2.

In September, she placed seventh in the championship division of the Women’s California State Fair Golf Championship, shooting 74-73 – 147 at Bartley Cavanaugh Golf Course in Sacramento.

A native of San Jose, Calif., TCU’s Senior Sabrina Iqbal is a two-time AJGA champion, competitor in the Augusta National Women’s Amateur and four-time Northern California Junior Golf Association Women’s Player of the Year. She shot a -1 score of 71 after a first-day score of one over to finished tied for second place at even par. She’s previously advanced to the match-play portion of the 2019 U.S. Women’s Amateur Championship and even competed in the 2019 U.S. Women’s Open.

Roseville’s Clare Sorensen graduated from Christian Brothers High School here in Sacramento as a four-year varsity letter winner and fired a second round score of -3 69 to finish at even par for the event to also tie for second place. Among her prep successes, she helped the Falcons to three divisional championships along with a regional and state championship in 2011…four-time all-conference selection…earned Scholar-Athlete recognition in 2010 and ’11…two-time all-division and all-city selection, as well… and three-time team MVP. She won the 2011 Northern California Junior Girls’ Championship at Spyglass Hill…also won the 2011 Sacramento City Junior Easter Championship before completing a wildly successful collegiate career at Seattle University and USF.

14-year-old and incoming high school sophomore Darla May Dela Torre played well beyond her years with a final two-day score of two to finish in a tie for fourth place. Dela Torre, fresh off her appearance in the USGA National Women’s Four-Ball Championship, hails from Fairfield and is a Morton Golf Foundation kid.