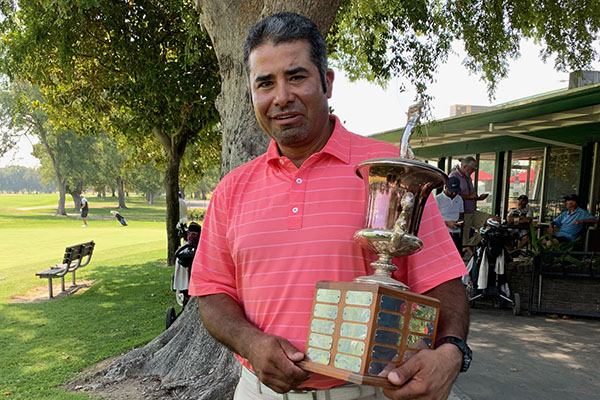 The Sacramento Golf Council proudly announces the results of the 19th Annual California State Fair Mid Amateur Golf Championship that was held on the weekend of August 21-22, 2021 at Bing Maloney Golf Course.

The tournament had 58 registered players, but after cancellations and withdrawals, we had 47 players tee it up on Saturday and 46 on Sunday vying for a total of 100 NCGA points in addition to Morton Golf gift card awards, playing from the Championship blue tees at Par 72. As has been the case for the last several years, the quality of the field has been very strong, with 36 players under a 2.8 index.

It was one of the coolest weekends we ever had for the event with temperatures in the low 80s on Saturday and mid-80s on Sunday. On Saturday, however, the players had to deal with a stiff wind for most of the day that resulted in higher scores with the field averaging 76.67 on Saturday and 75.37 on Sunday.

Once again, the dreaded 12th Hole at Bing proved the hardest hole by far averaging near bogey at 4.88, while the sneaky hard 1st Hole came in as the second most difficult hole at 4.51. Not surprisingly, holes 14 and 9, two reachable par 5s, came in as the easiest two holes at 4.62 and 4.7 strokes, both holes easier than the difficult par 4 12th Hole. The two shorter par 3s also proved very difficult most likely due to punishing hole locations with Holes 13 averaging 3.44 and Hole 3 averaging 3.42 over the weekend.

Despite the difficult holes and windy conditions, on Saturday, several players managed to play very well. In the morning, several players came in at even par 72, including Scott Bacon of Golf River, Chris Johnson of Rancho Cordova, Craig Miyamoto of Land Park and Russell Humphrey of Lodi. Seniors Bray Donoghue of Folsom, John Jaramillo of Fair Oaks and Doug Crowther of Sacramento, each over 60, showed that their games were up to the competition shooting 71, 73 and 74, respectively. Joining Brady under par were defending champion Juan Gonzalez of Antelope at 2 under 70, Rocklin Shaw of Carmichael at one under 71 and Alvaro Estrada of Sacramento with a sizzling 68, four under par.

On Sunday, the wind died down, and the scores got a little better. Some of the players that went off early that didn’t play very well on Saturday showed that there were some birdies out there. Allen Garner and Jody Hack both from Rancho Cordova had great rounds of 69 and 70. Garner, who shot 84 on Saturday, found something early and improved by 15 strokes, moving up from 45th to 26th place. Several other players turned in solid even par rounds, including Brian Thompson of San Francisco, Bryan Hunt of Sacramento, Michael Meyer of Roseville, Tony Padilla of Sacramento and Scott Alward of Lincoln. But the tournament came down to players from the last three groups.

Marc Engellener of Rocklin, who had won the 100th annual Sacramento City Men’s Championship with a 62 on the final round earlier this summer in June, made an early move with birdies on 2 and 9. But cruel back to back lip-outs from the middle of the cup on 10 for par and 11 for birdie, were too difficult to overcome, and he finished 2 strokes back with a solid final round 68 after birdies on 14 and 18. Rocklin Shaw, got within one stroke of the lead with birdies on Chris Johnson, who is still seeking his first Mid Am victory after falling short in multiple playoffs over the last decade, also made a solid move and got within two of the lead after his birdie on 10, but a bogey on 13 derailed his comeback, finishing four strokes back at 2 under. Juan Gonzalez, tried hard to defend his 2020 Mid Am championship, but he never could get it going with bogeys on 3, 8, 11 and 13 to go with birdies on 7, 9 and 18 finishing at 1 under.

Brett Viboch, last year’s runner up in a similar position as last year as a chaser, down four strokes to start the day, made a strong move to catch the first round leader with 6 birdies on the day on Holes 7, 9, 10, 11, 14 and 15, but bogeys on the par 3 5th and 13th holes left him just one shot short. In the end, it was Alvaro Estrada’s week. After shooting one of his best rounds ever in this tournament, 68, on Saturday, he backed that up with very solid play carding just one bogey to go with 3 birdies and 14 pars, including a miraculous up and down on 16, a great two-putt on 17 from 40 feet and a solid two putt on 18 to hold off all challengers and claim his first State Fair Mid Am Championship!