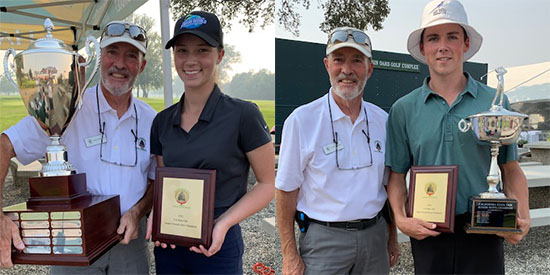 This year’s event was held at the Haggin Oaks Golf Complex. 164 players teed it up, 25 in the 7-11 age groups and 136 in the 12-18 age groups. The evening prior to the tournament we had a total of 184 players signed up, but the very poor air quality, due to major wildfires in the Sierra foothills and mountains, resulted in several late withdrawals on Saturday morning.

The overall girls champion was Ellie Bushnell, age 16 from Granite Bay, with a three under par 69. Ellie also won the same title in 2019 when she was 14. The overall boys champion was Logan Green, age 17 from Davis. Logan won with a birdie on the first playoff hole over Clark Van Gaalen, age 15 from Turlock. Both shot six under 66..

The complete leaderboard can be viewed on the JGANC website at:
https://jganc.bluegolf.com/bluegolf/jganc21/event/jganc2139/contest/5/leaderboard.htm

Many thanks go to my co-directors Mark Perry who will be taking over the tournament next year, Lainie Case (on the green prizes for the 7-11 age groups), Peggy Chan (posting scores), Linda DeLong (spotter on hole #11), Bob Fleming (rules on Arcade and MacKenzie), Mike Fleming, (starter on MacKenzie), Chuck Honeycutt (rover and spotter), and Matt Nadeau (rover and water on Arcade).

I’m also thankful to Pat Keys (rules), Marcia Whiting (rules), Bill Rider (rules), and Jim DeLong (spotter on #10) all of whom have volunteered many times for other SGC events. I also had two volunteers from JGANC – Katrina Weinstein (starter and rover on Arcade) and Tom Tripp (head rules official for JGANC).

Finally, I am grateful to Mike Woods, Haggin Oaks General Manager, Murray Salisbury, Tournament Director and all the Haggin Oaks tournament staff. They did a superb job setting up for the event and are always great to work with.