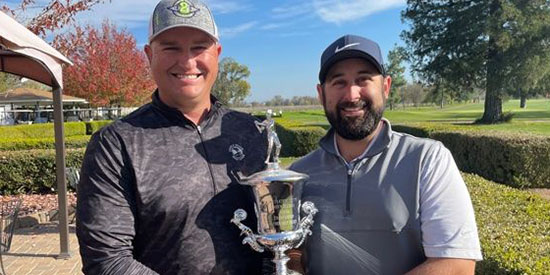 32 teams competed in the qualifying round on Saturday, October 23 to determine seeding for the first round of match play. Medalists in the qualifying round were the teams of Mason Benbrook/Brady Siravo and John Byers/Jason Herrera – each with 11 under totals of 61. The first round of match play was to begin on Sunday, October 24. However, record rainfall totals washed out the round. It was delayed until the following Saturday, October 30. The second match play round was held the morning of October 31 and the quarterfinal round finished later that afternoon.

Because the original schedule called for the final match to be concluded by the afternoon of October 31, and many of the teams were not planning for another weekend, the tournament committee agreed to allow the remaining four teams to schedule their matches at a mutually convenient time. One of the semifinal matches was held on Saturday, November 6, with the Byers/Herrera team defeating the team of Keith Okasaki/Drew Robbins 1 up. The other semifinal match was held on Sunday, November 21, with the team of Marc Engellener/Bobby Bucey defeating the Benbrook/Siravo team 3 & 2. The final match was held on Saturday, November 27. The Engellenner/Bucey team captured the championship with a 4 & 3 victory over the Byers/Herrera team (pictured).

Thanks go to the participants, the tournament committee and the Mather Golf Course staff for accommodating the adjustments to the schedule.