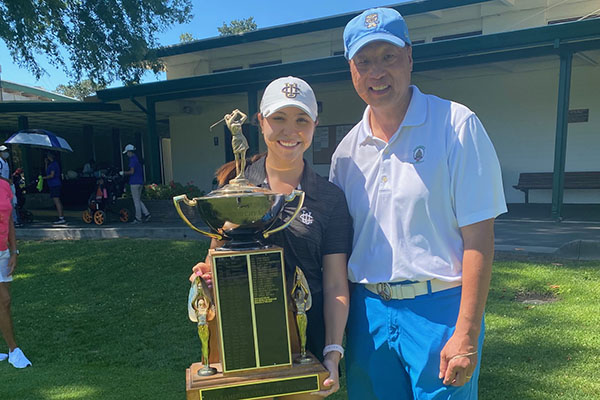 The Sacramento Golf Council (SGC) proudly announces the results of the 86th Annual Sacramento City Women’s Golf Championship. As has been the case for the last several years, the quality of the field was incredibly strong, with 31 players playing to under a 2.8 index (with +5.3 being the lowest handicap), as well as diverse, with top high school players, college players and some post-graduate players.

We had a very warm weekend with temperatures in the 90s. We actually caught a break because forecasts earlier in the week predicted temperatures well in the 100s. On the first day, Samantha Bruce, a junior at Seattle University, carded 6 birdies on holes 6, 8, 9, 11, 12 and 15 with a single bogey on hole 13 before finishing with a 5 under par round of 68 and taking a two-shot lead over Sienna Lyford into the final round on Sunday. Sienna, a senior at UC Irvine, had 6 birdies of her own on holes 7, 9, 10, 11, 15 and 18 to go with three bogeys on holes 3, 14 and 16.

Several other players played well on Saturday shooting one under 72s, including four teenagers, 16 year old Haley Wong of Roseville, 15 year old Christine Yu of Folsom, 15 year old Nikki Chindavong of Fairfield, and 14 year old Sophia Lee of Fairfield, who had just won the Sacramento County Junior Girls tournament earlier in the week at Cherry Island. Joining the teenagers at one under par was 2015 United States Senior Amateur Champion Karen Garcia of Cool who still has the length to compete with birdies on three of the par 5s.

On the second day, the course played a stroke more difficult for the overall field due to some difficult pin placements, but some players managed to play exceptionally well. Coming in early with a one under par 72 bettering her 80 the previous day by 8 strokes was our youngest competitor in the field, Petra Yee of Sacramento, age 13, who improved her position by 13 spots from a tie for 26 th after the first round to a tie for 13th place, in the money after the final round.

Following Petra an hour later was former local standout for Oak Ridge HS and 2018 County Women’s Champion Lexi Perry, of Rancho Murieta, who shot a very impressive round of 71 capped off by an eagle on the par 5 14th hole to finish the tournament at even par in fourth place overall. Lexi just finished her final year of college golf at Boise State.

Contrastingly, Baylee Hammericksen, who will play her first year of college golf for the University of Oregon as a Freshman this Fall, played solid all weekend finishing at 1 under par in third place. Baylee, who just completed a stellar high school career winning two Oregon HS State Championships, tied for the fewest bogeys over the weekend with four but just could not get enough birdies to challenge for the lead.

Despite the great play by Petra, Lexi and Baylee, the tournament turned into a two player race in the final grouping between Samantha and Sienna. After the 6th hole, it looked like Samantha was going to run away with the tournament after building a 4 shot lead after a birdie on the par 5, but after Sienna birdied the very difficult 7th hole and Samantha bogeyed the equally hard 8th and 10th holes, suddenly Sienna found herself only one shot back. After they both birdied 11, Sienna tied the lead with a birdie on the par 5 14th hole and took the lead on the par 4 15th hole after Samantha made a costly bogey.

Showing her resilience, Samantha stuck her drive on the par 3 16th to seven feet after Sienna hit a great shot right over the flag inside of five feet. They both made their birdie putts and Sienna maintained her one shot lead. After they both parred the 17th hole, and drove it into the fairway on the 18th, it all came down to their final approach shots on 18 to a very difficult pin location to the back left of the green. Forced to go at the flag for birdie, Samantha just pushed her shot long right in the back bunker, and then Sienna played a very smart shot about 25 feet short of the flag to the middle left of the green.

After Samantha could not get up and down from the bunker, Sienna two putted for par and a two-shot victory with her trusty caddy, her dad, Keith Lyford on the bag.

Before Sienna’s standout performance in the afternoon, the Council also crowned new champions in the handicap flights earlier in the day. In the President’s Flight, Council Member Nanci Smith played well both days to lead wire to wire with two net under par rounds of 70 and 69 to beat June Kitapan of Fairfield by 7 strokes and in the Director’s Flight, Julia Hadley also of Sacramento similarly ran away with her flight beating Karen Biscaha of Fair Oaks by 6 strokes with a net 71 and 70.

The Council wishes to thank each and every player that participated in the event as well as all the staff and volunteers from the SGC and from Morton Golf at Bing Maloney that helped make this another wonderful golf tournament.

Sean Wong, tournament director, would like to especially thank all the spectators and players for their support, and special thanks to all the out of area players for making the long trip to Sacramento. Special thanks also to tournament co-directors, SGC members Janice Luis, Peggy Chan, Greg Bisi, Patty Mitchell, Mike Fleming and Steve Yates, and tournament volunteer, Riley Wong, for their hard work, and to George Golden, the tournament director at Bing Maloney. Sean would also like to thank SGC President Larry Glasmire for all his help with the Golf Genius app.