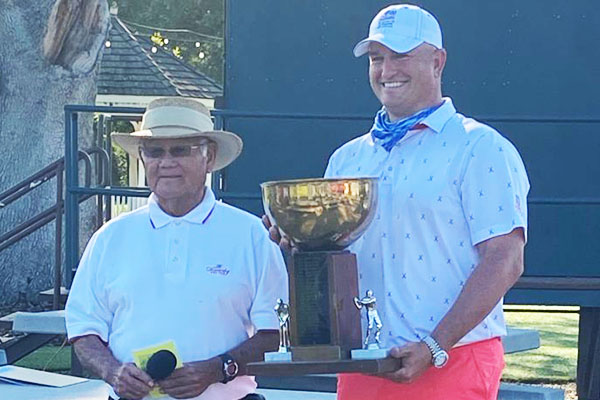 Marc Engellenner called it the best day of his golf career.

Engellenner had it going on Sunday at the Alister MacKenzie Golf Course, a par-72, 7,030-yard championship layout. He was long off the tee with his driver. He hit four of the five par-5s in two. He rolled in birdie putts. He was exceptional with his iron game. He shot 10-under-par 62 – a spectacular round at the Haggin Oaks Golf Complex.

Starting the day tied for 14th place and four behind the leader, Griffin Long of Davis, following an even-par 72 in the first round, Engellenner had his game in high gear from the get-go. He came from behind to win the 100th Sacramento City Men’s Golf Championship in convincing fashion – a four-shot victory in some challenging conditions, with afternoon winds and smoky skies from a fire, near Cal Expo.

Engellenner’s 62, a bogey-free round that featured an eagle and eight birdies, is just two shots off the course record of 60, set by Jake Johnson on Sept. 3, 2011 during the 87th California State Fair Men’s Amateur Championship. Johnson played that day with a young, rising star, Cameron Champ of Sacramento, who now has two wins on the PGA Tour, including the Safeway Open in 2019 at Napa’s Silverado Resort and Spa.

“Jake played just this amazing round. The scoring back then was a little different than the way we do it now. The word got out that (Johnson) was 7-under, 8-under, 9-under, and the crowd started going out there and I would say we had 75 to 100 people on that last hole,” said Mike Woods, a PGA member who is Vice President, General Manager and Director of Golf at Haggin Oaks and is also a former Sacramento City Men’s Golf Championship tournament director. “It was quite a round.”

Engellenner delivered a knockout blow to the sold-out field of 123 players, as he finished his round birdie-birdie-birdie over the last three holes. He completed the two-day, 36-hole event at 10-under 134.

The event is presented by the Sacramento Golf Council.

“Mark played phenomenal golf today,” said Woods. “I watched some of the holes and what I saw was just this real patience and just playing within himself. There was really no ups and downs. He just kind of would get up and hit the best shot he could and the putts started falling.

“Very impressive. He’s gotten kind of recommitted to the game over the last few years. He’s such a good player. All these guys out here can really play, but to shoot 62 today is really something special.”

The tournament, which began in 1921, is also a NCGA points event. The event is open to all male amateur golfers with a current World Handicap System Index of 5.0 or less, according to the Sacramento Golf Council.

“This is crazy that this happened at this stage of my life,” said Engellenner, a resident of Rocklin, who plays out of Catta Verdera in Lincoln and works as an insurance agent in Grass Valley. “I teed off an hour in front of the leaders. The first time I felt any comfort in the round, of actually being comfortably in the lead, was on 16, to get to 8-under. I think I checked the leaderboard. It was nip and tuck all day.

“I played 16 holes of the round today, like in the hunt, and then I get to the 17th tee and all of a sudden, I’ve got a three-shot lead going, ‘holy heck, like this might actually happen.’ ”

Jonathan Tanihana of Sacramento finished in second place, rounds of 69 and 69 for a 138 total.

Sutherland was in the lead at one point, at 5-under after he eagled No. 1 and birdied No. 2.

Engellenner, a 1996 graduate of Del Oro High School-Loomis, hit 11 fairways in regulation and 16 greens in regulation. He had 28 putts.

“A lot of credit to Mike Woods and the agronomy staff here,” said Engellenner. “They set up the course in the exact same condition two days in a row, which as a player, it gives you the ability to adjust to it during the tournament. I didn’t adjust to it until late in my first round. But then the conditions were similar in the second round.

“The speed control of the putter was the thing that carried me through, because I didn’t have to work for anything to two-putt today. I made a lot of putts today because I could actually control my speed and read the greens again.”Engellenner got off to a good start, making birdie on the par-5, 503-yard first hole, as he two-putted from 60 feet after hitting driver and 3-iron.

He eagled the par-5, 544-yard fourth hole, as he made the putt from 10 feet after hitting driver and then a 7-iron from 185 yards that hit the flag stick.

He birdied the par-3, 201-yard sixth hole, hitting 5-iron and making the putt from six feet.

The birdie barrage continued on the back nine.

He completed the round by making birdie on the par-5, 537-yard 18th hole, as he two-putted from 25 feet after hitting driver and 7-iron.

Engellenner felt good about his warm-up session on the driving range.

He added: “To come out and conclusively win essentially validates my entire career.”

The Alister MacKenzie Golf Course put up a defense with its greens, stimped at 10.5.

Two representatives of the United States Volunteers-America, retired U.S. Army Brigadier General Robert Hipwell and U.S. Army Major Geoff Howeter, were on hand for Sunday’s final round, to tend the flag on the 18th green.

“We’re tending the flag on the 18th hole,” said Hipwell. “When the players come up, Major Howeter will approach the green. And as all the players get on the green, then he will pull the flag out, move it off to the side, until all players have finished.”

Services that USV-A provide include chaplain services, flag folding, flag presentation, rifle detail, color guard and playing of taps. The United States Volunteers-America, Inc. is a nonprofit organization with units throughout the country.

“It’s a big honor for us to be here, to be part of this,” said Hipwell. “We’re getting involved with the community here, as you can see, it gives us a little exposure and some public awareness of who we are and what we do. We’re not trying to recruit anybody. We’re just wanting to be out in the public and let the public know that we’re here.

“As these players come up to the green, once they all get on the green, Major Howeter will pull the flag to stand at parade rest until they’re finished.”

Hipwell, a U.S. Army Major General, is the national commander for United States Volunteers-America. He had 42 years active service and had six combat tours. He was awarded a purple heart.

It’s the third year that an honor guard for United States Volunteers-America was on hand for the tournament.

Hole-in-one in first round

Hisham Hussein of San Dimas (Los Angeles County) aced the par-3, 174-yard third hole with a 7-iron during the first round on Saturday on the Alister MacKenzie Golf Course.

Marty James is a freelance writer who makes his home in Napa. He retired on June 4, 2019, after spending 40 years as a sports writer, sports editor and executive sports editor for the Napa Valley Register, a daily newspaper in Napa County. He is a 1979 graduate of Sacramento State and a member of the California Golf Writers & Broadcasters Association. He was inducted into the CIF Sac-Joaquin Section Hall of Fame in 2016.