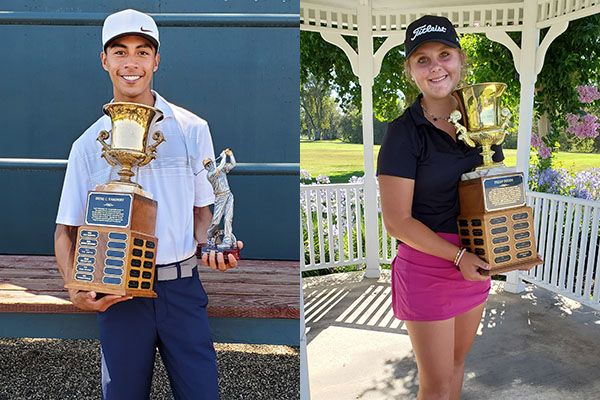 For two days at the Haggin Oaks Golf Complex, the tournament namesake Peggy Dodds did as she’s done for decades, greeting junior golfers on the tee and at the finish of their round, handing out trophies and congratulating them on their excellent play.

Sacramento’s Patrick Dumag, fresh off his graduation from Inderkum HS, a victory in the Sacramento County Golf Championship two weeks ago and headed to Sac State in the fall, took home the boys overall honor and first place in the 16-18 age division with a two day total of -8 with scores of 70 and 66. His second round was bogey-free with four birdies and an eagle on the 17th hole to lead by two over Sacramento’s Coleman Dupre (71-68), by three over Carmichael’s Mason Benbrook (73-67), by four over Rocklin’s Luke Price (72-69) and by five over Elk Grove’s Zach Mate (72-70).

In the boys 14-15 age group, both Karson Kindelt from Loomis (72-73) and Ethan Allred from Roseville (72-73) finished at +1 with Truman Ashforth another two strokes back at +3 (75-72). In the Boys 12-13 age group, Fair Oaks’ Landon Abalateo scorched his age group with a brilliant score of +1 (75-70) to lead by nine over the second place finisher. In the boys 10-11 age group, Rancho Cordova’s Sudhaamsuram Parvataneni and Pleasant Hill’s Tavin McKinley both finished at -3 with matching scores of 35-34. And in the boys 7-9 age group, Benson Chiou from Orinda took home honors with a +5 score of 38-39.

The girls played equally amazing golf. Three girls finished at +2 for the event with Kylie Sebastian from Novato (75-71) taking home honors in the girls 16-18 age group and Mather’s Tavia Burgess (74-72) and Christine Yu from Folsom (74-72) sharing low score in the 14-15 age group. Also noteworthy play was sixteen-year-old Meghan Paracuelles from Folsom firing a +3 score of 76-71 and fourteen-year-old Sophia Lee from Fairfield shooting a 78-71 to finish third in her age group.