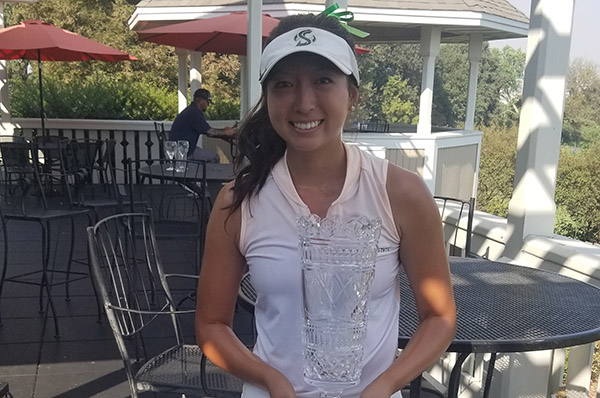 The 25th State Fair Women’s Championship was contested at Bartley Cavanaugh Golf Course, Sacramento, CA on September 5 and 6, 2020. It was a very toasty weekend with temperatures soaring well into triple digits.

Carding a 7-under 65 on Saturday, Tess Blair was able to separate herself by five strokes as the field went into the final round on Sunday.

Blair, a sophomore at Sacramento State from South Jordan, Utah, won the Big Sky Player of the Year and Freshman of the Year awards in 2019-20.

Starting her final round with a bogey, it looked as though Blair might allow the big lead play a factor. But she regained the dropped stroke immediately with a birdie on No. 2, and Blair was steady for much of the day, tallying nine consecutive pars.

On the par three 12th, Blair hit a bump in the road with a double bogey. Once again rallying, Blair circled three straight birdies on hole Nos. 14-16. Capping the round off with a bogey on No. 17 and a par on No. 18, Blair got back to seven under for the tournament, finishing off the event with a seven-shot victory and the only player under par.

C. Sorensen shot the low final round, a 3-under 69, to move into solo second place at even par. Another three players were tied for third at 1 over par.