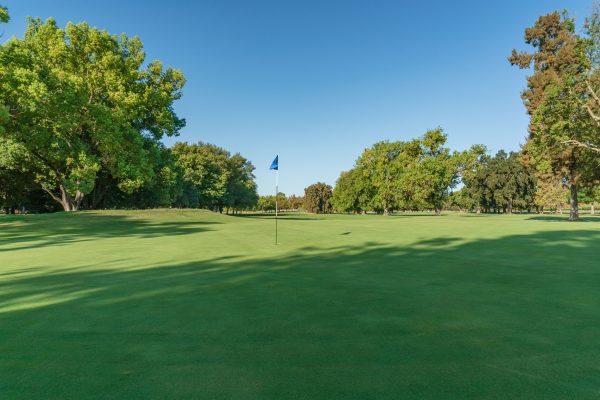 On Saturday, the tournament began under extremely hot and abnormally humid conditions. This did not stop Juan Gonzalez of Antelope from posting an amazing first round score of 64 that included an extremely clean card of 8 birdies on Holes 1, 2, 3, 5, 9, 11, 14 and 15 with no bogeys in the second to last group. Juan finished second in 2017 and 2019, and recently won the 2020 Sacramento County Men’s Championship in July, so he came ready to win his first Mid Am (Masters) championship.

Before coming in with his 64, several players came in with solid rounds. Four players shared the lead at three under par 69, including Travis Peterson of Santa Rosa, Domingo Jojola of Carmichael, Russell Humphrey of Lodi and Peter Canevari, of Modesto. Peter, age 62, was one of 5 seniors (55+) that played the weekend, including Dave Baskins, Brady Donoghue, Doug Crowther and Daniel Orovich. Also posting solid rounds under par on Saturday were RC Orr and Brett Vibock of Sacramento, Rocklin Shaw of Carmichael and defending Champion Garrett Wagner of Brentwood with one under 71s. Juan barely missed Garrett’s tournament record 63 that he shot in the second round last year.
The second round started out like it was going to be a nice day. It felt significantly cooler with less humidity than Saturday and the early groups teed off with clear blue skies. However, that changed about half way into the day when the winds shifted and the course filled with smoke for about a two hour stretch that made it seem like a Sunday in Scotland. Greg Bisi, who was spotting at 12, said that you could barely see the big Oak tree on 12 from the tees, the smoke got so thick.

Despite the poor conditions, Juan Gonzalez was on cruise control with a five stroke lead. But instead of pressure coming from the final group, Brett Viboch and RC Orr, both mounted charges from one group behind, both cutting Juan’s 7 stroke lead on them to 3 during the day. Brett had a great round early with birdies at 2, 3, 6 and 11. Brett bogeyed the difficult 12th hole but regained his momentum with birdies at 13 and 14. A late bogey at 17 ended his charge and he finished with a 68, 5under for the tournament at 3rd place by himself. RC also had it going early with birdies at 3, 4, 7, 8, 9 and 11, but bogeys at the tough par 4s at Holes 10 and 12 ended any hopes of catching Juan. Kyle Hopkins of Santa Rosa, Kris Server of Chico and Brian Helton of Los Osos, all had solid rounds on Sunday shooting 69, 67 and 68, respectively, but they were too far back to catch Juan.

In the end, Juan had the perfect game plan with a 5 stroke lead, not taking too many chances, avoiding any big holes and taking advantage of the par 5s. He finished with a solid three under 69 with birdies at three of the four par 5s at 6, 9, 11 with a single bogey at Hole 12. Juan capped the weekend off by rolling in a short birdie putt at 18 to claim the 2020 California State Fair Mid Am title. Congratulations Juan!