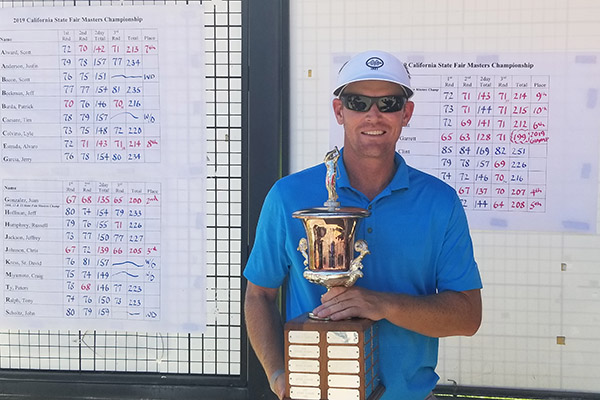 Below is a summary of the 2019 CA State Fair Masters tourney. I would like to thank my co-directors Janis Luis and Greg Bisi for their help. George Golden, Bing Maloney Tournament Director, and Mike McGrath, General Manager at Bing, and their staff also helped tremendously in getting the course in excellent condition for this top caliber competition. — Sean Wong

Ryan Sloane of Campbell returned to defend the 2019 California State Fair Masters Golf Championship that he had won the last five straight years. Although Ryan played well finishing at 2 under, tied for 8th place, he did not have the magic touch that he has had since 2014, when he set the tournament record at 20 under par.

Instead, on a very hot weekend with temperatures reaching triple digits, Garett Wagner of Brentwood, set the pace on Saturday with a low round of 65 that included 8 birdies and a single bogey on Hole 17. Also coming in early with a solid 67 was Chris Johnson of Rancho Cordova, a 4 time Masters runner up, and coming in late, Juan Gonzalez of Antelope, matched Johnson with birdies on his last three holes for a 67.

The second round started poorly for the first round leader when he pull hooked his drive onto the 16th fairway, unable to punch out and made a double bogey six. However, after parring the difficult second hole, Garett birdied 11 of his last 16 holes to set the tournament single round record with a scorching 63, which also set a two day record of 16 under par.

Chris Johnson could not find many birdies on Saturday finishing at even par 72 to fall 11 shots back at 5 under. Jay Weiss of San Jose, shot the second best round of the day with a bogey free 67 that included an eagle on hole 6 to finish at 7 under par, 9 strokes behind.

Seemingly out of the tournament, Juan Gonzalez, started the day with 7 straight pars and a double bogey on 8 before going on a birdie binge on the back nine with birdies at Bing’s Amen corner of 10, 11 and 12, coming in with a back nine 30 to post another solid round of 68. Coming off the 18th hole with a birdie, the reigning Sacramento County Champion had no idea he would be 7 strokes behind going into the final round at 9 under par.

After Sunday’s round, several other players were sitting under par, including Brett Viboch of Moraga at 3 under and Scott Alward of Lincoln at 2 under, but it would seem that everyone was playing for second and third place with Wagner holding an insurmountable
seven stroke lead at 16 under. However, Juan, drawing from a previous battle with Sloane in 2017, forcing a playoff after coming back from 5 strokes behind, kept the pressure on all day. With Wagner, Gonzalez, Weiss and Johnson all playing in the final group, Monday’s round started off with Chris Johnson’s birdie at hole 1 that would be a precursor of several birdies in the final group. The front nine was pretty uneventful with each player playing well. At the turn, Johnson and Gonzalez shot 3 under 33s, Weiss with a 34 and Wagner with a 35.

Despite shooting 3 under, Gonzalez was still five back when he teed off 10. However, Wagner hit it over the green and out of bounds on 10 while Gonzalez birdied the hole and suddenly Wagner’s lead was down to two. Wagner quickly righted the ship and birdied 11, 13 and 14 to bring his lead over Gonzalez back up to 5 after the 14th.

While Gonzalez and Wagner were battling it out for the Championship, Chris Johnson and Jay Weiss were having a good battle for 3rd place with Johnson taking a one stroke lead over Weiss after matching Wagner’s birdies on 11, 13 and 14. Also, playing two groups behind, Jay’s brother, Jeff Weiss, who started the day at even par, made some big noise with eagles at 6 and 14 on his way to an 8 under 64 that included 7 other birdies to go with three bogeys. Jeff of Roseville was the leader in the clubhouse until the final group came in.

Just when Wagner thought he took control of the tournament, Gonzalez made one final push with birdies on 16 and 17 that brought him back to two back after Wagner bogeyed the deceivingly tough 17th. On the 18th tee, Wagner’s lead was down to just 2 strokes. He knew he needed a par because Gonzalez, the tough competitor, finished off his round with another birdie on 18 to finish a 65, 16 under par overall. Wagner, who’s iron play carried him all weekend, made the pressure par to secure his first California State Fair Masters championship.