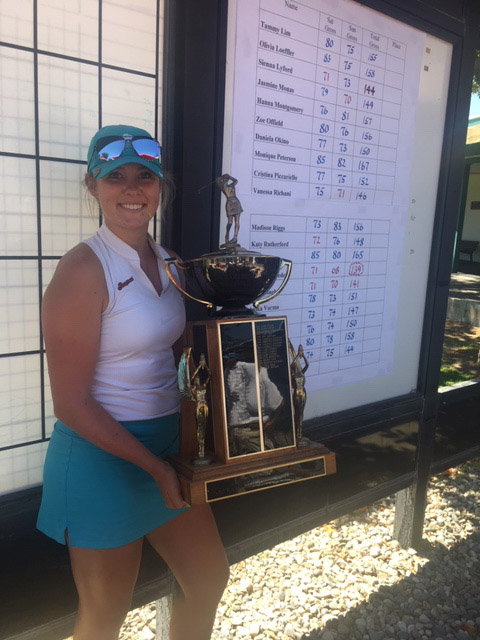 The Sacramento Golf Council proudly announces the results of the 84th Annual Sacramento City Women’s Golf Championship. The Council wishes to thank each and every player who participated in the event as well as all the staff and volunteers from the Council and from Morton Golf at Bing Maloney that helped make this another wonderful golf tournament. 41 ladies started the weekend all playing at gross in the Championship Flight. The field played from the gold tees at about 5900 yards at par 73.

Sean Wong, tournament director, would like to especially thank all the spectators and players for their support, and special thanks to all the out of area players for making the long trip to Sacramento, some driving back to SoCal right after the tournament. Special thanks also to tournament co-directors Janis Luis, Mike Fleming and Larry Glasmire for their hard work, and to George Golden, the tournament director at Bing Maloney. Also thanks to the Bing Maloney ambassadors and Janis’ husband, Alan, who helped with spotting and greeting on the course.

As has been the case for the last several years, the quality of the field has been very strong, with 30+ players under a 3.0 index, as well as diverse, with top high school and college players and a few middle school and post-graduate players, including Lynn Cowan, 2001 and 2002 Sac City Champion, and Karen Garcia, 2015 US Senior Women’s Amateur Champion.

It was a hot weekend with both days in the 90s with the wind kicking up on Saturday and a calmer, but hotter day on Sunday. On Saturday, Sienna Lyford, a UC Irvine Anteater, a local standout at Granite Bay HS. had the round of the day with a 71 that included an ACE on the 16th hole which was playing especially tough with a far back left hole location. Joining Sienna in the lead at 2 under were Simar Singh, of Los Altos, who just finished her Freshman year at the University of Oregon, and Nicole Schroeder, of Rocklin, a senior at Oregon State University. Also breaking par at one under 72, were Ellie Bushnell, one of the top junior golfers in California who will be a Freshman at Granite Bay HS in the fall, and Katy Rutherford, a Junior at the University of Nevada at Reno, from Katy, Texas.

On the second day, several players came in under par, leaping up the leaderboard. Jasmine Monas, a junior on the Sonoma State golf team from Cameron Park, came in early with a 3 under par 70, that included 5 birdies and an eagle on 12 that put her 3 over, 149 overall. Darla Mae Dela Torre, the youngest player in the field, who just turned 13, also came in with an impressive one under 72 to tie Jasmine at 149. Then, Vanessa Richani, who just graduated from Granite Bay HS, and on her way to play for Long Beach State in the Fall, started hot with 4 birdies on the front nine but stumbling slightly with bogeys on 14 and 15 coming for a 2 under 71 to lead in the clubhouse at even par, 146. Then the last three groups came in starting with Lynn Cowan’s 2 under 71 to briefly lead at one under, 145. Ellie Bushnell, overcoming an OB and double bogey 6 on hole number 2, fought back with 4 birdies on the back nine to shoot 2 under for the day and leading at 3 under 143. Then came the final group. Katy, struggling to find birdies, came in with a 3 over par 76, to put her at 2 over for the tournament, and Sienna, who couldn’t find the magic from her hole in one on Saturday, shot an even par 73, 2 under overall. Simar and Nicole separated themselves from the field by starting off very hot with Simar posting birdies on holes 1, 6 and 7 to go with six pars on the front, but Nicole had a brilliant front nine going 4, 4, 3, 3, 3, 3, 3, 4 and 4 for a 5 under 31 on the front to take control of the tournament.

Maintaining that 2 stroke lead going into the final hole, Simar needed a birdie and Nicole a bogey to force a playoff. However, both parred the last hole to finish 139, 7 under, for Nicole, and 141, 5 under for Simar.

Nicole Schroeder of Rocklin, becomes the 2019 Sacramento City Women’s Champion, joining an impressive list of the area’s top golfers since 1935.