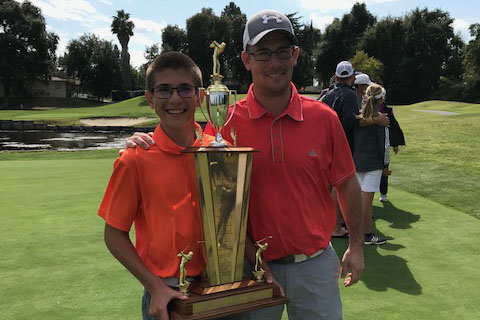 It was a crisp Fall Saturday morning when 33 teams convened to compete in the 71st Annual Walter and Olga Strand Junior Senior Championship. Fathers, sons, mothers, daughters and even grandparents were present competing or watching the event.

When the golf was completed, we gathered to have lunch under the gazebos next to the 18th Green. Sean Wong and I feverishly tallied the scores. Thank you Sean for your help and patience when figuring out those Callaway net totals. During the scoring, when shuffling scorecards around and momentarily losing one and then finding it again, it reminded me of Dorothy Trevethick who for many years helped Sean and me at the scoring table. Dorothy had a way of keeping things organized, all which seemed disorganized to the rest of us. If you ever worked a scoring table with Dorothy, you know what I mean (LOL)!

In the field this year I had five past champion teams play: Tom Morton, Bobby and Sofia Aldridge, Mike and Birdie Brown, Shawn and Hayden Herrick and Ron Rojas and Jaden Dumdumaya.

I recognized them with a “Past Champion” sign on their golf carts.

It was indeed a great day with another successful tournament completed, with friends and family present making memories that will last a lifetime.

Thank you again to Sean Wong for his advice and assistance.