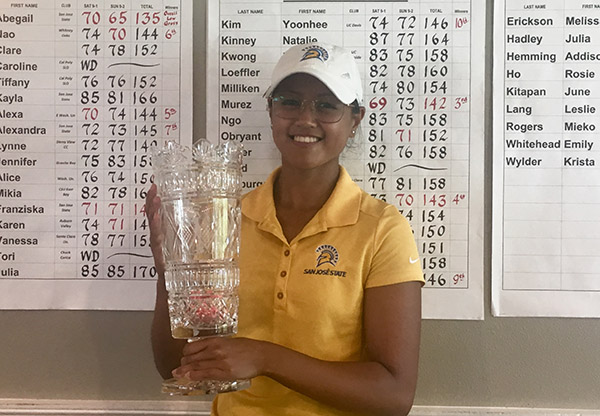 Last season at San Jose State, Abegail Arevalo broke through for her first collegiate victory. On Sunday, Arevalo added another line on her resume with a major amateur title. The Spartan junior from the Philippines topped the California State Fair Championship by a stunning seven shots at Bartley Cavanaugh Golf Course.

Arevalo opened with 1-under 70 in the first round of the championship, and entered the final round trailing Marni Murez, a junior at Santa Clara, by one shot. But Arevalo’s score dove in the final round. She came back with 65 to finish the event with a 7-under 135 total, seven shots better than runners-up Murez and Franziska Fredrich.

A year ago, Arevalo fell one shot short of champion Vanessa Ha. Arevalo went on to lead her San Jose State team in scoring as a sophomore, and ended the season with an individual berth in the NCAA San Francisco Regional. She was San Jose was a first-team All-Mountain West selection. Her first collegiate victory came in March, when she won the MountainView Collegiate with a 3-under 213.

Ariell Swan was solo fourth with a 143 total, and Alexa Clark, who was tied with Arevalo after the first round, tied for fifth overall with Nao Bando. They were at 144.

Melissa Erickson won the handicap flight by seven shots over Krista Wylder, while Sherry Evans was the senior flight champion.