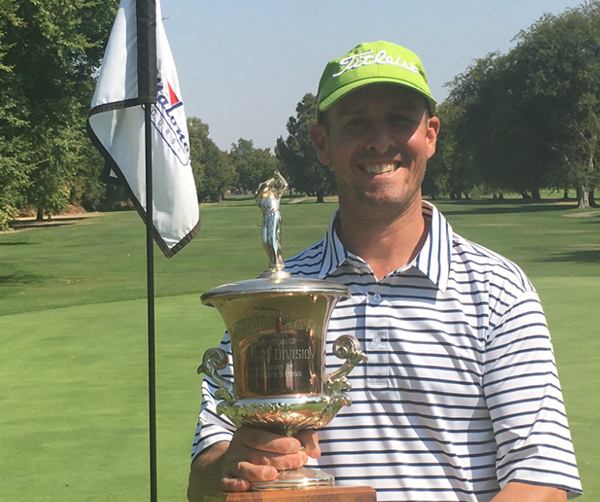 It looked like Ryan Sloane‘s (Campbell, Calif.) State Fair Masters winning streak would be snapped at Bing Maloney Golf Course on Monday. But with two big putts late, Sloane pulled it out and notched his fifth straight win in the event.

The 39-year-old Sloane grabbed the lead with a 5-under 67 on Saturday, with Chris Johnson (Rancho Cordova, Calif.) and three-time State Fair Masters champion Jeff Hoffman (Folsom, Calif.) two shots back.

On the final day, Sloane was unable to match the pace he had set the previous two rounds. After bogeying the easy par-5 9th hole, Sloane three-putted the 10th and it suddenly became a three-way race.

With Sloane treading water, it was Johnson who made the biggest push in the final round, chipping away at the lead and eventually catching Sloane on the back nine. Johnson birdied the 16th, and when he made a great putt on the 17th hole, he took the lead for the first time in the championship.

But winning is also a habit, and Sloane would answer in the biggest possible way.

Johnson overcame a poor drive on the final hole, punching out and hitting the stick with his 30-yard pitch shot. Sloane hit his 140-yard approach to 15 fee, and needing to hole the birdie putt to deny Johnson and force a playoff, Sloane converted.

The playoff started on the short par-4 17th. Johnson had a 15-footer for birdie but narrowly missed. Sloane then faced a 7-footer for the title, and again he came through, putting his name on the trophy for the fifth straight time.

For Sloane, it was the second straight year he made a putt on the 17th to win in a playoff; last year he dispatched Juan Gonzales with a 30-foot walk-off birdie.

Sloane (73) and Johnson (69) finished the tournament at 6-under 210. Garett Wagner (Brentwood, Calif.) closed with a 70 to finish alone in third at 4 under. Hoffman was fourth at 2 under, with Kevin Alexander (Napa, Calif.) rounding out the top five at 1-under 215.

“Bing Maloney has been really great to me over the last five years”, said Sloane afterward. “I knew I had my work cut out for me against a 3-time champ (Hoffman), a 3-time runner-up (Johnson), and a 2-time Seaver Cupper (Garett Wagner). It was another nail-biter for me and this tournament has a very special place in my heart.”