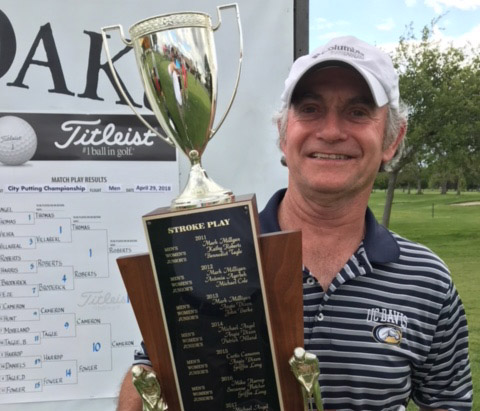 The 60th Annual Sacramento City Putting Championship was held on April 27, 28 and 29, 2018 at the Haggin Oaks Golf Complex in conjunction with the annual Haggin Oaks Golf Expo. Qualifying rounds took place on Friday and Saturday with a $5 donation per 18 hole round to benefit junior golf. Players could play as many rounds at $5 each to achieve the lowest score for qualifying. The superintendent at Haggin Oaks did a fantastic job double cutting and double rolling the large putting green prior to each day’s competition. The course was set up the same for the qualifying rounds, but changed for the match play rounds. Kudos to Mike Woods, General Manager at Haggin Oaks for the course setup. There were three divisions – men, women and juniors with 16 players in each division qualifying for the match play round on Sunday. The medalist in the qualifying round for the men shout 26 (ten aces). On Sunday, the juniors competed first starting at 9:00 AM with Casey Cross defeating Michael Pearson 2-1. Casey and Michael were seeded one and two based on their qualifying rounds. At 11:30 AM, the women began their matches with Vicki Philpott defeating Eden Anderson 1 up on the 19th hole. The men began their matches at 2:00 PM and Steve Roberts defeated Cameron Curtis 3-2 for the Championship.