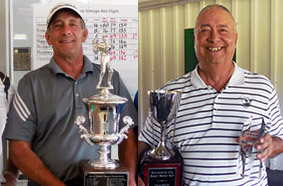 The tournament was played at a nicely conditioned Mather GC. Mather staff were very helpful with all the details of putting on a tournament, they all have a very friendly attitude.

The Net flight was only men, as no women entered. Gerald Mraule shot net 66 the first round, playing to a four handicap. Jim Rooney almost took the lead from Gerald, with a 64 on Wednesday, but lost to Mraule by just one stroke

The Super Senior scratch division was won by Chuck Richesin at 142. Herb Jensen took second place at 143. Jensen won this last year with the same score, winning over Richesin by one stroke. Richesin got it back this year! Good golfing.