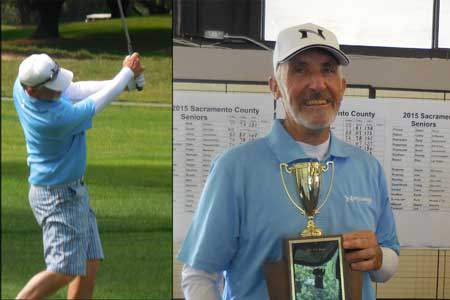 The 2015 Sacramento County Men’s Senior & Super Senior Championship was held on May 12th & 13th at Ancil Hoffman Golf Club in Carmichael. This years event was the 50th Anniversary of Ancil Hoffman. The players had to deal with some wind, but the course was in excellent condition. The Senior Division became a two horse race with Jim Knoll winning with an excellent score of 70-67-137. In the Super Senior Division, Ron Johnson survived a three-way playoff, winning with a birdie on the second hole. Johnson, Bob Olds, and Charles Richeson finished at 149. Johnson placed his approach shot to within 2 feet, making 4 on the par 5 second playoff hole.